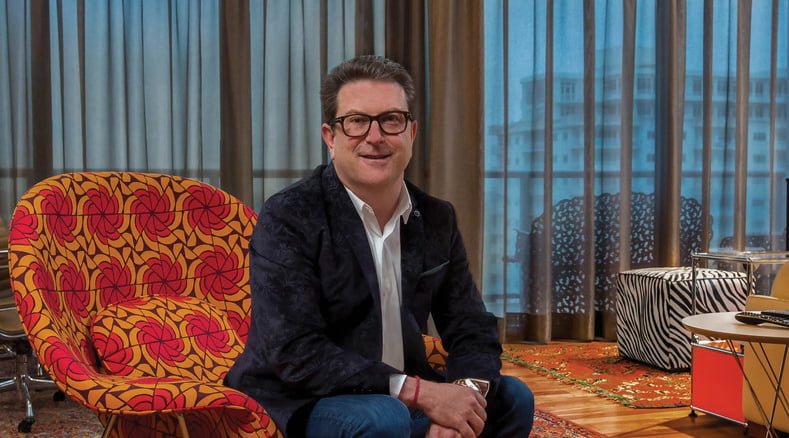 Internationally recognised as a world-class entertainment and lifestyle brand, Hard Rock Hotels & Casinos offer stylish and contemporary design unparalleled service and the thread that unites them all – music. Hard Rock’s current Hotel and Casino portfolio is located in the world’s most enviable resort destinations, as well as urban gateway cities.

What is your position within Hard Rock Hotels?

As Vice President of Hotel & Casino Operations Development, I’m privileged to, spearhead the development of global operations for Hard Rock International, and have been honoured to lead the team instrumental in accelerating its worldwide expansion efforts over the past six years. My speciality is in leading diverse and demanding projects from conceptualisation to completion, as well as managing large, complex staffs. I’ve been honoured to witness and be directly involved in the brand’s rapid growth with the opening of several hotel and casinos in locations ranging from Ibiza, Spain, Vallarta, Mexico and Punta Cana, Dominican Republic, to Goa, India and Panama City, Panama, among others. Our team’s unique blend of creativity, strategic thinking and passion for authenticity, paired with Hard Rock’s sui generis vibe has further solidified the brand’s standing as an international industry leader.

Where are you based?

What do you enjoy most about your role?

The opportunity to be exposed to many cultures, their customs and music to integrate into our operating standards and hospitality ethos.

What are the complexities of meeting the demands of shareholders, fulfilling the growth of your management team and delivering the brand’s values to the guests?

The complexities relate to both the fluidity and interconnectivity of the demands and the output is the calibration of our team efforts to maximum efficacy. On any given day we assess project critical paths and emergent scenarios to triage our stakeholder resources accordingly.

Hard Rock has been the authority on music since the company’s founding more than four decades ago. The brand has excelled in a crowded marketplace by staying true to its musical roots and infusing music as the DNA of our hotel experience.

Our walls are adorned with priceless pieces of music history through thoughtfully selected memorabilia displays. As the curator of the world’s largest music memorabilia collection, expertly designed, memorabilia displays are a signature staple of the brand and one that brings a museum-like quality to Hard Rock Hotels.

What are the personality traits that define a successful and happy hotel proprietor, in your opinion?

The characteristics of a happy and successful hotel proprietor are equal parts – impresario, financier, curator and general.

With 24 hotels already opened, will Europe become a bigger focus for the Hard Rock Hotels brand?

As the brand continues expanding worldwide, establishing a deep brand presence in Europe is top priority. Europe welcomed its first Hard Rock Hotel in Summer 2014 with the grand opening of Hard Rock Hotel Ibiza. The hotel has become a crown jewel of the island and resonates greatly with the British and Spanish vacationer, among other key European demographics. We look forward to continue electrifying the region with upcoming debuts in key influential international destinations, such as London and Berlin.

As Hard Rock was founded in London with the opening of the first Hard Rock Cafe in 1971, we’re excited to open Hard Rock Hotel London just steps away from the original location that started it all. A conversion of the existing Cumberland Hotel, famous for hosting Jimi Hendrix many, many times, the upcoming Hard Rock Hotel will be ideally situated in one of the city’s most sought after locations – directly at Marble Arch on Hyde Park and at the crossroads of the iconic Oxford Street and Park Lane. Offering panoramic views over Hyde Park, the 900-room Hard Rock Hotel London is scheduled for completion in summer 2018.

It’s no surprise that Germany’s first Hard Rock Hotel is slated for Berlin, especially a location like Checkpoint Charlie – where East met West – symbolic of much that is right in the world and aligns perfectly with the ‘Love All Serve All’ democratic values of the Hard Rock brand. We look forward to bringing the ‘Love All Serve All’ motto to life for our new friends in Berlin through music, design and service, once the 372-room city hotel reflective of Berlin’s musical past and spirited present opens in 2020. Hard Rock Hotel Berlin Checkpoint Charlie is set to be part of a larger multi-use project where the two plot areas comprise nearly one hectare at Checkpoint Charlie. The multi-use project will include retail spaces, offices, residences and a curated exhibition space commemorating the history and symbolism of Checkpoint Charlie and the Berlin Wall. As a new-build hotel, the project gives Hard Rock the opportunity to influence design direction and since the hotel is set to rise in a site where the Berlin Wall once stood, this history will be evident in the design of memorabilia and other elements. One of the most remarkable pieces will be a section of the original Berlin Wall. Currently located in Orlando, Florida, USA, this historic piece will soon be making the 7725 kilometer journey back home to become an integral part of the hotel’s design. Local dignitaries and musicians alike will be invited to inscribe thoughts and mottos to reflect the special history and cultural significance of the location. Additionally, guests of the hotel will also be treated to the Hammond C3 organ from Britannia Row Studios, which was used by Pink Floyd to record the album The Wall.

What can we expect when Hard Rock Hotel London opens?

London is special for us as it is the birthplace of the brand and we look forward to completing the circle once the city’s first Hard Rock Hotel officially opens.

What other exciting projects do you have in the pipeline especially after the recent opening of Hard Rock Hotel Tenerife?

We’re proud to be riding on a wave of global growth and the next few years are filled with exciting new hotel debuts, such as the opening of Hard Rock Hotel New York in the heart of Times Square. We’re looking forward to bringing the Hard Rock Hotels experience to some of the world’s most appealing destinations.

Are Hard Rock Hotels looking at any countries in particular for new openings?

Projected to open in May 2017, Hard Rock Hotel Shenzhen will be the first Hard Rock Hotel in Mainland China upon completion. Located at Mission Hills Centreville, the 22-story, 258-room Hard Rock Hotel Shenzhen reflects modern architecture throughout present day China. The property will feature a Body Rock® fitness center, signature restaurants, an entertainment lobby lounge and more. The top floor of the hotel will be comprised entirely of suites offering pristine views of the entire property that covers more than 44,000 square meters. Hard Rock Hotel Shenzhen, just 60 minutes away from the border to Hong Kong and 40 minutes to the City Center, is nestled among lush green gardens with convenient access to the world-class signature courses of Mission Hills Golf Club, the world’s largest golf club as accredited by the Guinness World Records. The differentiated offerings of the destination will make it a no-brainer for both business and leisure travellers, as well as multigenerational groups.

Have you noticed any particular trends in hotels in Europe compared to US and Asia?

Multigenerational travel is a burgeoning trend throughout much of the hospitality industry with a particular highlight in Asia and again amplified in China specifically.

Have you noticed any particular trends in hotel interior design?

How important do you feel hotel design has become when launching a new hotel?

Design always has, and always will, matter. Great design should be a reflection of the times as well as the intention of the pursuit.

What do you enjoy most about what you do?

Informed creation toward a measurable end.

What would be your dream hotel project?

What would you say are the three best places you’ve ever stayed?

Home, overnight on a train bound for Paris (Wagon Lits) and the Oriental Bangkok.

Where currently ranks highest on your travel wish list?

Let’s finish with the issues of personal and work life balance. How do you aim to achieve a good balance and what do those closest to you think of your attempts?

If you love what you do, you are never at work – for me, my career has been a singular pursuit of my passions. Those closest to me, I believe, understand the unique view and approach I take with my work and though I suspect they may feel I work too much, they also are aware I live each day full of joy for the road ahead.